Right Before Your Eyes

Stereoscopic 3D makes the imagery in TV shows and movies look startlingly realistic. Here’s the technology behind the illusion.

Is there a new animated film that isn’t available in 3D? James Cameron’s stunning Avatar set the pace for realistic motion pictures. Now the technology is spreading to live action, from the suspense of the World Cup to the silliness of Jackass 3D.

All these films trick your brain into seeing depth by simulating stereoscopic vision. To understand how it works onscreen, lets first examine how we see in the real world.

Close one eye and take a walk through your home or around the block. Your sense of depth diminishes and the scene flattens out. Open both eyes, and you see your surroundings in stereo, with each eye perceiving everything from a slightly different angle (see Fig. 1). The difference between each eye’s view is greatest for objects close up and tapers off for those farther away. Using that information, your brain calculates distance, helping you perceive depth.

To create a sense of depth onscreen, each eye sees video shot from a slightly different angle, corresponding to the average distance between human eyes. In animated films, these “shots” come from computer models that generate the two views. In live action, two cameras are used.

Old-fashioned 3D movies used color to separate the two images, but current theaters take advantage of polarization, a property of light rays. Though we think of light traveling in a straight line, it can actually wiggle up and down or side to side, or spin in a corkscrew manner. Polarizing filters allow just one type of light to pass.

In a theater, the 3D projector uses these filters to project two images, a right-eye perspective displayed with clockwise-polarized light and a left-eye perspective with counterclockwise light. The audience wears polarized glasses that allow only the proper polarity to reach each eye (see Fig. 2). The brain assembles the separate perspectives into a view that resembles real life.

In the Living Room

3D works a bit differently at home. 3D-capable LCD or plasma TVs rapidly flash alternating left-eye and right-eye video frames. But instead of polarizing filters, your glasses have “lenses” that are actually tiny LCD panels.

These glasses are known as active shutter glasses. As a right-eye video frame flashes on the screen, the LCD over the right eye switches from opaque to clear. The right-eye LCD darkens again and the left-eye LCD becomes clear when the left-eye video frame appears (see Fig. 3). At any moment, you see only one perspective, through one eye. But the left/right video images alternate so quickly— 120 times per second — that you perceive a full, three-dimensional view.

Glasses can produce convincing 3D imagery, but they can be awkward to wear. Next-gen 3DTVs will ditch the glasses and put lenses right on the screen.

In one setup, the TV divides the left- and right-eye perspectives into alternating vertical columns. To picture this, imagine slicing two photographs into thin vertical strips and alternating them: one from the right photograph, one from the left, etc. Microscopic lenses over the screen bend the light so that slices of the right-side perspective reach your right eye, and slices of the left-side perspective reach your left eye (see Fig. 4).

The technology is very challenging. But when it’s ready, TV will look nearly as real as life itself.

Figure 1. In real life, each eye sees the world from a slightly different angle. Your brain compares the difference between the two perspectives to produce an impression of depth. 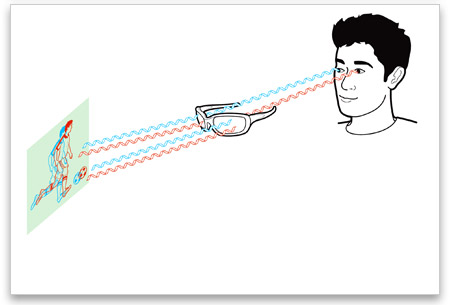 Figure 2. In a 3D movie theater, the screen displays images shot from two different perspectives, each using light with a different polarization. Polarized glasses filter just one perspective to each eye. 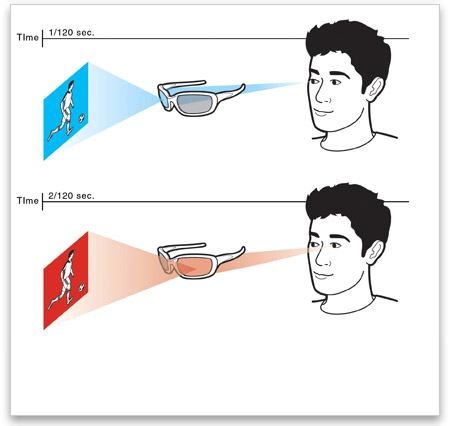 Figure 3. 3D TVs alternate rapidly between images shot from two different perspectives. In active shutter glasses, LCDs over each eye alternate between clear and opaque in synch with the TV. You see through only one eye at any given moment, but the alternation happens fast enough that you perceive a single 3D image.

Figure 4. Engineers are developing 3D TVs that work without glasses. Instead, they use lenses in front of the screen itself that direct the proper portion of the image to each eye.